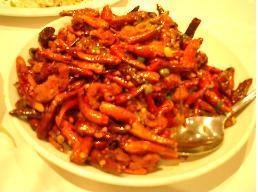 Whilst is Sydney I thought I lay off the curried roo and go for a Chinese instead. Being off guard this cheeky little dish of chicken and chilli (with about 150 fired chillies) nearly caused my stomach to rupture and put me out of action for a number of days.

Saucy Edwina Currie is such hot property a Pot Noodle has been named after her. A spicy new Edwina Curry" flavour of the popular steaming snack has been rushed out. ... Makers Unilever Bestfoods plan to have the fiery noodle, which has a tikka masala sauce, in the shop within weeks. They said "Its a tribute and joins our Indian-style snacks.."

JAILBIRD Lord Archer had a hot curry thrown over him by an angry inmate at his new prison. The former deputy chairman of the Tory Part sat stunned wit sauce dripping down him after the attack at tough Catagory B Lincoln Jail. A visitor to the Victorian prison yesterday said "Archer didn't fight back. He wasn't hurt, just humiliated."

John Major has always has a passion for curries, his local Indian restaurant has revealed. The ex-PM often pops in to the Spice Inn in Huntingdon for a fiery chicken madras with wife Norma. He is such a regular, there is a photo of him on the wall with manager Aminul Islam.

Aminul,36, said "He seems to really enjoy a curry and it's a pleasure to serve him. He has a madras, pilau rice, naan bread and a half of lager while his wife prefers chicken tikka and wine.